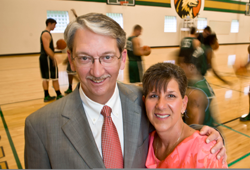 Mike and Monica Hax have long supported Wright State University Athletics. Their love of the green and gold began in the early 1970s when Mike was a student at Wright State. With only four buildings on campus, the university and its sports teams were still in their infancy.

Mike had a front row seat to Wright State history, witnessing the birth of several student organizations, including fraternities and the student newspaper. He and some friends got WWSU, the student radio station, off the ground and running.

"If it didn't exist, you started it," Mike explained. "There were all kinds of opportunities to start things that had never been done before."

Although she was a student at nearby Miami-Jacobs Career College, Monica still developed an affinity for Wright State. "A lot of my friends and family graduated from here. I used to come on campus with them," she recalled.

As the years went by, the pair became more involved with Wright State University Athletics, as both supporters and donors. They can often be found at baseball, softball, and basketball games, where they cheer on both the men and the women. Mike and Monica were two of the 500 Raider fans that made the pilgrimage to Buffalo, New York, when the men's basketball team played in the 2007 NCAA tournament.

For them, being a Raiders fan is about so much more than just going to the games. It's helping to create the best possible future for Wright State's student-athletes. After making annual gifts to athletics for several years, Mike and Monica decided they wanted to take their support to the next level.

After working with Wright State's planned giving staff, they decided to make a significant planned gift through their estate that will support Wright State University Athletics.

"The whole process of giving is easy, comfortable, self-paced," said Mike. "It's all about what you want to do."

While they are far too modest to think of themselves as trailblazers, Mike and Monica would like to inspire other Wright State alumni to step up to the plate.

"We're hoping it's like a domino effect," said Monica. "Maybe this will put an idea in the back of a graduate's mind to say 'I can do that.'"