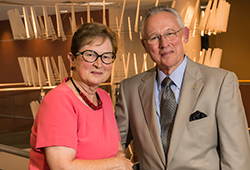 Sam and Lynne Dodson know all too well the struggles of most college students. After all, they endured many of the same trials and tribulations when they were students at Wright State. The precarious balancing act of going to school while holding down multiple jobs is still a challenge for many Wright State students, just as it was for the Dodsons in the late 1960s and early 1970s.

"I paid for my education myself with money I had earned and a small scholarship or two," recalls Lynne, who graduated in 1969 with degrees in English and secondary education. "I could not afford to go away to a school. I lived at home and worked up to three part-time jobs while going to school full time."

Sam started college under similar circumstances. "I wasn't able to focus as much—working and going to school," he says. "My grades were to a point where the university asked me to leave." Two years later, he returned to Wright State, eventually earning his degree in finance and banking in 1973.

Today, the Dodsons are making the transition to college much easier for students. The couple has established two endowed scholarships that not only help students complete their degrees, but also honor two individuals who left a lasting imprint on their lives.

The first scholarship—for history students—pays tribute to retired history professor Richard Swann, who helped inspire the Dodsons' deep appreciation and affection for British history, and in particular, Winston Churchill. The Dodsons keep in touch with Swann to this day.

The second scholarship honors the memory of Lynne's younger sister, Ellery Lois Hill, who passed away from leukemia at the age of 60. Hill began raising a family at a young age and never had the opportunity—or the money—to earn a college degree. But she loved to write.

"She was very good at honing in on the human aspects of what she was writing," Lynne explains. "If she could have gotten into it as a career, she would have done very well at it and had such a better quality of life." The scholarship established in Hill's memory helps nontraditional students with financial need that are pursuing the professional writing track.

In addition to their current scholarships, the Dodsons have made a planned gift to establish a third scholarship upon their deaths, which will benefit students of all majors with financial need. "I don't want students to go through what I went through—forced into working and going to school," explains Sam. "I want them to know that somebody cares."

Since the Dodsons do not have children, they view their Wright State scholarships as their personal legacy. "Scholarships provide someone with an opportunity that will probably change their life and their children's lives," says Lynne. "You're influencing more than one generation if you're helping someone get through college."