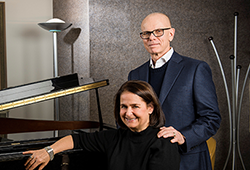 For Wright State graduates Tom and Joan Roddy, creating a scholarship has been music to their ears. They have long believed in the importance of education—and scholarships. And for many years, they provided scholarship support in their own unique and informal way.

With two busy careers, Tom and Joan would dine out nightly. They always sat at the restaurant's bar for quicker food service and the opportunity to engage in conversation with the bartenders and servers. Over the years, they got to know many young people who were working their way through college.

On an ad hoc basis, the Roddys would help people along their educational journeys by paying for books or part of their tuition. Joan fondly recalls making trips out to Wright State at the start of a term to buy books and other training essentials for some of these students.

When Tom and Joan both retired five years ago, they decided to get involved in a more organized way of supporting scholarships. Since they were dining out less frequently and meeting fewer college students, they turned to their alma mater for guidance.

In 2015, the Roddys established a scholarship for students enrolled in Wright State University's School of Music. The scholarship ties into the Roddys' newly found passion for music study and performance—Tom is becoming proficient at playing the guitar while Joan is mastering the piano—and their desire to help students graduate.

While the Roddys have made bequests for their music and other scholarships in their revocable living trusts, they are also making annual gifts so they can help current music students.

"We appreciate that Wright State provides ample opportunities for interested donors to meet and follow the progress of their scholarship recipients," says Joan. "We really enjoy attending our recipients' performances and seeing just what these young people are achieving."

For Tom and Joan, the scholarship is also a way for them to give back to the university that was critical in setting the foundation for their success.

After graduating in 1976 with a degree in accounting, Tom became a CPA and spent 10 years at the Big Eight accounting firm of Touche Ross, which later became Deloitte & Touche. In 1986, he returned to Wright State to serve as the associate vice president for business and finance. Seven years later, he went back to private industry, where he worked with financial management firms on investment strategies for private clients.

After earning her psychology degree in 1978, Joan headed to law school at the University of Dayton. After 30 years of practicing real estate law, Joan retired as a partner from Thompson Hine LLP.

"Our career experiences and opportunities were extraordinary, and it all started for us as a couple of kids at Wright State," said Joan.

Now, through their scholarship, the Roddys are helping Wright State music majors launch their future careers.

"We've always found it easy and worthwhile to give money to support many charitable causes," Tom explains. "But for us, as we discovered many years ago, the impact made on a hard-working, passionate, young person's life, when experienced on a one-to-one basis, is pretty remarkable and meaningful. And that's what our Wright State music scholarship provides for us at this stage of life."