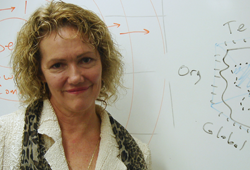 As a woman studying chemistry and physics at Wright State University in the early 1980s, gender bias was somewhat of an unknown to Kimberly Wiefling.

"I was treated with so much dignity and respect and included equally and fairly, I never even perceived that there was a gender issue," she said.

Kimberly would face a completely different reality following her 1984 graduation from Wright State.

In graduate school and the high-tech world of Silicon Valley, Kimberly quickly realized that women were not always welcome at the table. It's a blemish on corporate America she still sees today.

"I know from research that companies that have higher participation rates of women in their leadership and senior executive ranks make more money. There's really a financial benefit to companies that do include more women, and yet, there's still a bias," Kimberly explained. "My intention is to help eliminate that bias. Let's have women participating and contributing equally."

After spending 10 years at Hewlett Packard followed by a few turns at several startup companies, Kimberly founded her own company, Wiefling Consulting, in 2001. Today, business is booming, with much of it coming from Japan, where Kimberly travels almost monthly to advise Japanese companies on global leadership and management.

In addition to her consulting business, Kimberly is the author of six guides in her Scrappy series of books, including Scrappy Project Management and Scrappy Women in Business: Living Proof that Bending the Rules Isn't Breaking the Law.

Kimberly co-wrote Scrappy Women in Business with 11 of her "scrappy gal pals" to describe their real-life experiences as women in the world of business. It also inspired the name for a scholarship Kimberly has established at Wright State — the Scrappy Women Scholarship Fund.

The granddaughter of a coalminer and daughter of a welder, Kimberly was determined to achieve a college degree despite her lack of financial means. Following her high school graduation, Kimberly entered the military so she could attend college on the GI Bill. Scholarships also helped pay for her education.

Kimberly hopes the Scrappy Women Scholarship Fund will help women from similar backgrounds who may think a college education is out of their reach.

"I'd like to make that possible for some woman who comes from that kind of scrappy, hardworking family," she said.

The scholarship is also a means for Kimberly to give back.

"None of us made it to where we are today without help," she said. "We got here through the help and generosity of many other people. It's our responsibility to continue that flow of generosity."

Kimberly was initially surprised to find out that it only takes a small financial commitment to establish a scholarship. To fully fund the scholarship, she has made a bequest in her will where a percentage of her estate will come to the university. Kimberly, however, has already endowed the fund with current gifts so she can provide one scholarship a year to a worthy student.

"No matter how much you have, you can always share something with people who don't have as much, "Kimberly explained. "What brings real happiness is not the money or the wealth itself, but the ability to share it with other people."